Your inherent goodness, is as common as the grass... (Tao Te Ching part 6)

Capturing the essence of the Living Wisdom sessions could potentially take me days sometimes. You yogis bring sooo much to each session I could probably write 10 blog posts just from one night! My notes always starts off so neat, and then towards the end they are scribbles, as there is so much to capture. It’s so good. Thank you. I hope I manage to do it all justice, squishing it all together in cohesive summary to the best of my ability!

Last week we took away chapter 22 to work with on our own….What did we make of it?

Did it give us some permission to cut ourselves some slack?

Maybe feeling into it, we felt that we can allow ourselves some room to learn…to experience the duality that we have been talking about within the Tao. Or as Steve put it, to allow ourselves to “righteously cock up” from time to time! This of course, is in exchange for a more intuitive relationship with life. To feel into the disharmony, and perhaps even see a beauty in it. Like our Katie playing violin….noticing that even if a few notes are out of tune, we can cultivate a patience for them eventually coming together into harmony in their own perfect timing.

Once our Bhakti is strong, life may also know that it’s ‘game on’. It will inevitably notice that we are more open and ready to see the places where we may be out of harmony and start to draw in certain life situations to highlight that to us. Once it realises that you’re on board, it will think “Cool, let’s send in our men!” and cause apparent moments of dis-ease that bring to light the places within us where we are now ready to tend to.

First, it’s recognising that there is something there to work on. It’s always the way isn’t it? The only way we can change something is by accepting it initially. We have to let whatever it is do its dance before we make the decision to let it go. With the Tao Te Ching, Lao Tzu is telling us that it is totally okay for us to let an unwanted trait within us express itself fully. ‘Otherwise, it’s a game of bashing the mole’, Steve says. We’d be running around forever trying to bash the mole on its head, only for it to pop up again and again because it hasn’t been quite allowed to get it’s popping up out of its system just yet.

“Doesn’t it sound like the ultimate Asana?”, Steve says.

One where we’re not trying really hard to be in it, nor hiding shyly away not daring to embody it fully….but instead, being in it totally, steadily. There is a quality of translucence, of purity in this naturalness. Isn’t it true that people seem the most beautiful to us when they are just being themselves, without effort? Not ‘trying’ to be someone or something. If I hold a definition of myself, a fixed identity…you will only see me in front of you, not yourself. When we have nothing to prove, nor seeking validation from those outside of us, we become quite vacant. (In a good way!). We become a stillness – a mirror for others to see themselves in.

When the ancient Masters said,‘If you want to be given everything,give everything up,”they weren’t using empty phrases.Only in being lived by the Taocan you be truly yourself.

The biggest religion on the planet seems to be making something of ourselves, becoming a ‘somebody’. We put stuff onto ourselves…titles, labels, personalities… and can think in our head, ‘this is who I am’. But if we limit ourselves to just being this ‘somebody’, we have no room to expand, grow or be ‘anybody’! In this verse, Lao Tzu gives us the paradox – by being something other than ourselves by living in the Tao, we get to be truly ourselves. So perhaps, we don’t need to try so hard or ‘achieve’ as much as the rest of the world tells us…..

This week, our verse for exploration is verse 57. Although it may sound like a rather political verse, Steve asks if we can look at it first on a microcosm level, so within ourselves, before we extend it out to the macrocosm.
Here it is….

At our core, we are inherently pure, honest and good, but our world is surrounded by our laws, rules and walls because this is not yet trusted. We need morality because we are afraid that we are not innately good at our deepest essence. So we have ‘shoulds’ and ‘musts’ to make us good….but we are not here to be ‘good’, we are here to be free. And of course, if we were suddenly to be made free from these, most would fear the mess. The mess that would be created through people being suddenly lawless. And yes, there would most likely be mess that would play out, but it would be a temporary mess that has been built up through repression. It would need to come out before it all simmers back down. There would be turmoil, it will inevitably be making its way back to equilibrium.

So yogis, again this week, this verse is for you to go and weave it’s awareness into your life. Where are you painting rules onto the walls of your life? What ideas do you have of being ‘good’ or ‘bad’, that limit you from being ultimately free? What barriers have you built around yourself as to hold up an image of the ‘somebody’ you may have tried to be?

I work alongside you, to find these walls within myself and work to break them down. 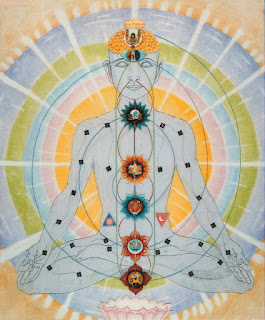